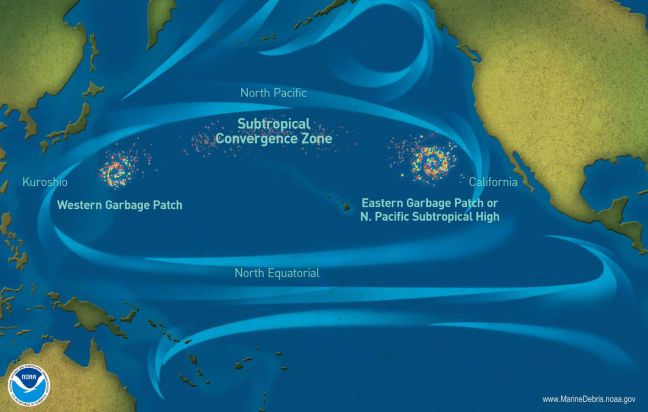 Watch how trash pollutes over the years…

Our oceans not only provide ample food for us when they are in peak condition, but they sustain life on this planet. In a visual representation experiment of the garbage patches around the world’s oceans, we can see just how seriously we’ve affected our oceans through Big Ag practices, littering, corporate disregard, and additional environmentally unfriendly practices which affect Mother Nature’s ‘womb.’

Some are already aware that there is a garbage patch off the coast of California that is thought to be roughly the size of a small state. Called the Great Garbage Patch, it spans from the US West Coast all the way to Japan. There are two other areas in the world that have been collecting enough debris to be given a garbage patch signification of their own though, in both the Atlantic and Indian Oceans.

These massive rubbish graveyards are hard to visualize, but Greg Shirah and Horace Mitchell have published their garbage patch visualization experiment results online this month from the NASA’s Scientific Visualization Studio.

Data collected from NOAA, the National Oceanic and Atmospheric Administration, which details information from floating, scientific buoys distributed across the oceans for the last 35 years, are depicted in pictures and video. You can see first-hand how all the trash ends up in 5 gyres, the so-called ocean garbage patches.

Despite legislation in the US enacted in 1972 known as the Federal Water Pollution Control Act (Clean Water Act), corporations have ‘soiled their own beds’ with massive amounts of waste.The Marine Protection, Research, and Sanctuaries Act (MPRSA) was legislate at the federal-level in 1972 and amended in 1988 by the Ocean Dumping Ban Act. 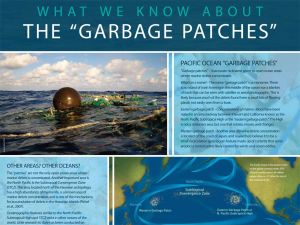 MPRSA was enacted to prevent dischargers from evading the Clean Water Act by dumping wastes in the ocean as an alternative to land-based sites. Two are its main purposes: regulate the intentional disposal of materials in marine waters, for which the Environmental Protection Agency (EPA) and the U.S. Army Corps of Engineers are responsible; and to promote related researches, under the supervision of the EPA and the National Oceanic and Atmospheric Administration (NOOA).Even with these regulatory bans, corporations are often only given a slap on the hand, and no criminal charges are ever brought to the forefront for offenders.

The MSRA states that it is illegal to dump anything:

“. . .including, but not limited to dredged material;

solid waste; incinerator residue; garbage; sewage; sewage sludge; munitions; radiological, chemical and biological warfare agents; radioactive materials; chemicals; biological and laboratory waste; wreck or discarded equipment; rocks; sand; excavation debris; and industrial, municipal, agricultural, and other waste…” (EPA) Any private person, employee, agent, department, agency, or instrumentality of the Federal Government, of any State or local unit of government, or of any foreign government must comply or pay an administrative civil penalty up to $50,000 for noncompliance and up to $125,000 for dumping of medical wastes with additional criminal penalties.”

You can see how these penalty amounts are little more than a pretext for lawmakers who want to win an election or gain political influence, and have no real influence over the actual behavior of those who are polluting our oceans the most.

Other countries have their own laws to ‘discourage’ ocean dumping, but India, China, and the US, among many other nations, don’t seem to understand the gravity of the growing garbage patches. Every year, between 5 and 13 million more tons of plastics wind up in the world’s oceans and a whopping 80% of that waste pours in from just 20 countries.

The US Department of Defense is arguably the absolute worst when it comes to defiling the oceans, and rivers, and thus, we can see why no hardball legislation is passed to protect this precious earthly commodity.

Where Does All This Trash Come From?

Massive amounts of plastic, including microscopic bits and pieces that end up living inside marine animals and runoff (including pesticides, herbicides, and non-organic fertilizers) are some of the worst offenders when it comes to fouling the great blue waters.

Additionally, pharmaceutical waste is flushed into our municipal water supplies, which is then often dumped in the ocean. NOAA states:

“Recent studies have confirmed the presence of low levels of pharmaceuticals in estuaries, rivers, streams, and ground water as well as in sediments. The ecological effects of these contaminants in coastal waters are largely unknown. However, there is growing evidence that some of these chemicals may have negative effects on reproduction in aquatic species or stimulate the development of antibiotic resistant bacteria.”

You might not be able to see how this run off affects tiny creatures, but more than one-third of the shellfish-growing waters of the United States are adversely affected by coastal pollution – much of it coming from industrial agricultural practices.

Not only are these companies destroying life on land, killing off bees, monarchs, and other pollinators, they are ravaging life in the water.

If you really want to ‘get it’ – how truly harmful the behavior of these corporations is to our oceans, the pictures and video provided by the visualization experiment help tremendously. You can see the experiment above.