“All your problems are on the inside, in your heart. The problems aren’t from the outside, from other people, so you need to study who you are. Who’s 100 percent you? If you understand your inside, then you’re not afraid anymore.” ~Jet Li

For far too many people, life is a daily struggle. Working a job they don’t like, overloaded with bills, stuck in sour relationships, managing health issues, the fear of living in a messed up world, and so on. We’re never really taught to study life and how to find happiness, but when we do, the struggle fades and life is recognized as a gift and lived accordingly. This is the path to self-mastery; learning to live in a way that honors your personal power and cultivates happiness, inner peace and graceful strength.

Self mastery should be our primary internal goal in life, for as Leonardo DaVinci is quoted as saying, “one can have no smaller or greater mastery than mastery of oneself.”

For nearly his entire life, martial artist and actor Jet Li has trained in wushu kung fu, and as practicing Buddhist he is also known for his devout daily meditation practice. Cultivation of his talents in these arts has led him to inspire many martial artists and ordinary people around the world.

Speaking from personal experience as a martial artist, the path of kung fu leads to respect for the self and for others, abundant health, confidence, spiritual clarity, and ultimately toward self mastery. These are the treasures of dedication to practice.

I recently came across a comment of Li’s regarding what he refers to as the three levels of martial arts, outlining the process of personal growth as it relates to combative sports, yet the wisdom contained herein is easily applicable to life in general, for it speaks to our innate need to first seek the power we need to survive, then to advance even further in the quest to thrive.

Level one: Learn the forms-and repeat them endlessly. “Use your body as a weapon,” Li says. “And you need to use the weapons very well, [so you] concentrate on skill.”

Level two: Physical technique is now innate, so psychological tools come to bear. “I don’t need to fight if I can scare you, or use my heart to convince you,” says Li.

Level three: You gain a mastery of inner peace, so that you no longer need to raise a hand. “We sit here, everybody feels safe, and I’m not scared of aggression. It’s close to religion, like Jesus. They beat me up, fine. But slowly they understand, and they drop their weapons. They don’t want to fight anymore.” ~Jet Li

The first level refers to the development of physical capabilities, which represent the fundamentals of defending and protecting oneself. When this level is reached, we become untouchable in a physical sense, yet we still feel the psychological burden of being fearful in a hostile world. We’re still influenced by fear, and we expect that the world will demand that we enter into confrontation and struggle. 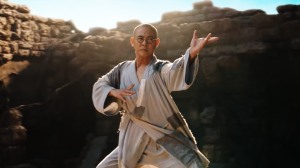 The second level is that of overcoming the psychological conditions which lead us to react from fear. When we achieve this level, we no longer feel compelled to react violently to this violent world, but instead are free to choose love over fear, drastically altering our relationship to others and the world at large. At this level, we are more powerful than most, and can avoid confrontation simply by remaining calm with the confidence of knowing just how strong and powerful we really are.

The third level refers to the inner peace and calm that comes with the realization that we are eternal beings and that whatever happens to us in the physical realm is of little consequence to the survival of our infinite, spiritual nature. At this level, there is no fear, and with this fearlessness we are able to bend the world to our will, influencing people and circumstances in a way that creates harmony and balance in relationships, and favorable outcomes.

As Bruce Lee calls it, this is the art of fighting without fighting, the ultimate achievement for the martial artist and the seeker of self-mastery.