The nanny mentality of those who create scientific studies and government policy have increased their insanity. Researchers are now calling for a ban on long pointed kitchen knives to reduce deaths from stabbing.

Yes, I’m serious and we’re not talking about a klingon or batleth weapon here. A team from West Middlesex University Hospital said violent crime is on the increase – and since kitchen knives are used in half of all stabbings, it’s time to ban them. Why? Because nanny knows best.

They argued many assaults are committed impulsively, prompted by alcohol and drugs, and a kitchen knife often makes an all too available weapon. This research was actually published in the British Medical Journal. 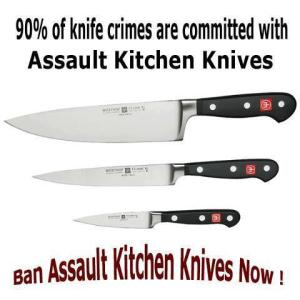 But why stop at kitchen knives? Why not ban ice picks, scissors, tweezers, needles, scalpels, utility knives, gardening tools, or anything else with a pointed tip?

It is very difficult to deny the assault currently underway on freedom of choice and the efforts being put forth to disarm people from any type of object that can inflict harm, regardless of its intended purpose.

The controlling mindset of those attempting to protect every person from everything has gone off the deep end. From the anti-bullying movement to government intrusion in banning all guns from public possession, there is no longer logic in building government policy or formulating scientific protocols around modes of reason. All is based on the ludicrous nature of our nanny culture. There is an absolute refusal to accept the fact that it is the people who cause harm and not the objects they classify as weapons themselves.

In gun control debates, facts like Switzerland having one of the lowest crime rates in the world, yet one of the highest numbers of guns per capita, seems to be a little tidbit that is quickly dismissed by the mainstream and policy makers.

The researchers from this study said there was no reason for long pointed knives to be publicly available at all.

Apparently ten chefs are enough to base a study revolving around the banning of pointy knives. What about camping, fishing, or something very general like opening a well-taped cardboard box? Are chefs the authority on the effectiveness of pointy knives in these instances as well? 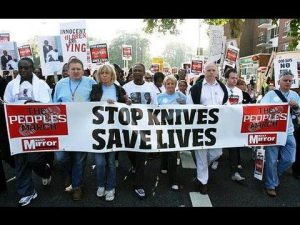 They consulted 10 top chefs from around the UK, and found such knives have little practical value in the kitchen.

The researchers said a short pointed knife may cause a substantial superficial wound if used in an assault – but is unlikely to penetrate to inner organs.

The researchers say legislation to ban the sale of long pointed knives would be a key step in the fight against violent crime.

“We suggest that banning the sale of long pointed knives is a sensible and practical measure that would have this effect.”

“Offensive weapons are defined as any weapon designed or adapted to cause injury, or intended by the person possessing them to do so.

Critics claim that knives are not designed or adapted to cause injury to human beings and are simply designed as effective cutting tools for food.

Dr. Bonnie Weston said such logic could easily be transferred to any sharp object. “A scalpel can sever an artery in a microsecond and kill a man if used a weapon, however their design is functional for their intended purpose being an incision and surgical tool,” she stated.

A spokesperson for the Association of Chief Police Officers said: “ACPO supports any move to reduce the number of knife related incidents, however, it is important to consider the practicalities of enforcing such changes.”